4 questions on the Syria conference

Shortly before this year’s virtual Syria conference – the fourth Brussels Conference on ‘Supporting the future of Syria and the region’ (#SyriaConf2020) – Diakonie Katastrophenhilfe organised a webinar on the topic of Cash and Voucher Assistance (CVA) in Syria. CHA Director Ralf Südhoff was on the panel. In this interview, he explains the indirect consequences of the COVID-19 pandemic on major crises, the challenges and opportunities CVA offers to countries such as Syria, the implications thereof for German aid organisations, as well as the key role Germany could play in CVA.

1. The fourth Brussels Conference on Syria is taking place these days. The international community is coming together to discuss the future of Syria. It is a significant event – but unfortunately it is not very well covered in the press. Is the COVID-19 pandemic displacing all other crises? Do we risk forgetting Syria?

This risk is indeed substantial and can also be vividly demonstrated: An international media analysis, for example, has determined to what extent the international press has taken up the issue of Syria in 2020. While it was still being covered relatively frequently at the beginning of this year, the attention plummeted at the end of March – even the issue of ‘toilet paper’ alone was then reported twice as often. But the indirect impacts of the COVID-19 pandemic diverting attention from other priorities go beyond bold anecdotes and the Syrian crisis:

Firstly, in the Global North, there is a threat of a further growing focus on “own problems” versus international responsibilities. In the long and barely audible debate about Germany’s global humanitarian “COVID responsibility”, at first even some leading ministers in the German Federal Government stated that now ‘Germany must be saved first’. Secondly, the major COVID-19 challenges make us forget other crises that so far have been very poorly financed in global aid plans for 2020. Thirdly, there is a growing fear of a threatening “development rehearsal” – if we now focus all aid on short-term COVID-19 programmes, what will happen, for example, to measles prevention programmes in many African countries, or to resilience-oriented aid for over five million Syrian refugees in the region? That is why it is so important that an international COVID-19 rescue package will actually be adopted now, as it has been pushed recently, and that in Brussels all donor countries would once again turn their attention to long-standing crises – such as Syria – and their solutions.

2. In view of the Syrian crisis, there is also a growing debate about what kind of aid is the right one. The focus is shifting to Cash and Voucher Assistance (CVA), a much-discussed topic in humanitarian assistance for many years. What exactly does CVA mean, and what opportunities does it offer?

CVA means providing humanitarian assistance not in the form of donations in-kind, such as tents, blankets, medicine, or food, as was traditionally the case, but as a shopping voucher or in the form of cash. Experts see this approach as a particularly dignified, self-empowering form of humanitarian aid, because it gives people freedom of choice based on their individual needs and is not based on a universal needs assessment defined by the Global North.

The Syrian crisis has become a sort of exciting laboratory for this, as such innovative approaches have been implemented in new dimensions: For example, almost all the food aid for the 5.5 million Syrian refugees in the region is now provided in the form of cash transfers. Studies have shown that this is an effective instrument in countries with functioning markets. In addition, billions of dollars have been channelled into local economies. Turkey and Lebanon go one step further: there, refugees receive social assistance in the form of “multipurpose cash” instead of multiple grants or in-kind donations from numerous aid organizations.

Furthermore, cash can be a step towards building the often lacking social security systems, as well as an instrument for a rapid crisis intervention: According to a World Bank survey, in the MENA region alone, the rapid expansion of the previously limited, state-run social welfare programs for the COVID-19 response meant that around 10% of the total population could be reached with cash assistance.

3. Is cash also an opportunity for more locally-anchored aid implemented by local actors?

Yes, but it depends on the framework and the objective. Take the example of Syria: Studies have shown that even in extremely sensitive conflict areas, such as North-Western Syria, cash aid can be provided and even entails less risk of corruption and misallocation than in-kind aid. As also explained in the latest webinar, for example, Diakonie Katastrophenhilfe reaches several thousand people with cash aid elsewhere in Syria thanks to its local partners. A local NGO can implement this in a flexible manner and, in some cases, in legal grey areas vis-à-vis the national government. This is an exciting and important contribution.

At the same time, all aid organisations must face the question: What will be our role in the future, if cash programmes are really to reach millions of people on a broad scale? And what genuine contribution can we not make? This raises both questions of competition and division of labour, and of organizational survival. For example, cash programmes can be very effective if they reach all those in need in the long term, based on one system in one country. That is also very cost-effective, and economies of scale also play an important role in emergency aid so that more people can be supported. Such programmes, however, can only be implemented or at least led by large international NGOs or UN organisations today. Small NGOs will therefore continue to play an important role in specific settings like Syria, as they currently do in cash aid, but in other contexts – they might need to reinvent themselves and engage, for example, rather on the monitoring or assessment side.

4. What does this mean for German humanitarian actors?

For example, one German aid organisation until recently had a locally-based, exemplary cash programme in Jordan – only for 500 Syrian households, though, with its own cash card, its own payment system, and its own contracts with financial service providers. In the long run, this can only be ineffective. Large organisations create the same structures for more than 500,000 people, and all players must regularly recheck what a sensible division of labour in the interests of those affected would be.

At the same time, this change in the humanitarian sector is a difficult balancing act, also for the German government. How donors drive the ‘cash revolution’ can have major consequences: The urge of the European Commission and the British DFID, for example, to rely almost exclusively on cash programmes run by a few or even a single organisation(s) with a ‘single agency’ approach, regardless of the situation on the ground, should spur aid organisations to improve. In some cases, however, it instead leads to very damaging competition, for example, between the large UN organisations – for years the aid to Syrians in Lebanon has been a deterrent example.

Here, the German government in particular is called upon to act as a leading and pragmatic donor to promote a sensitive change management and a good coordinated balance in the cash arena. It is therefore all the more regrettable that the German government cannot bring itself to develop the cash policy strategy it announced years ago.

The interview was conducted by CHA Communications Officer Lena Wallach on June 26, 2020.

Further information on the ‘Syria: IV Brussels Conference on Supporting the Future of Syria and the Region’ can be found here. The conference, jointly hosted by the European Union (EU) and the United Nations (UN), is taking place in Brussels from 22 to 30 June 2020.

On 18 June 2020, Diakonie Katastrophenhilfe hosted a webinar on ‘Cash and Voucher Assistance in Syria: Opportunities and Challenges’. The recording of the webinar, all presentations and a Q&A document in which the panelists answered open questions from the participants are now online. All files can be accessed via Sharefile here.

Ralf Südhoff is Director of the Centre for Humanitarian Action (CHA) in Berlin. Previously, he was Director of the WFP Regional Office for the Syrian Crisis in Jordan and the WFP Office in Berlin, as well as a ten-year honorary board member of Oxfam Germany. Ralf’s work focuses on humanitarian reform, the Triple Nexus, Syrian crisis and the MENA region. 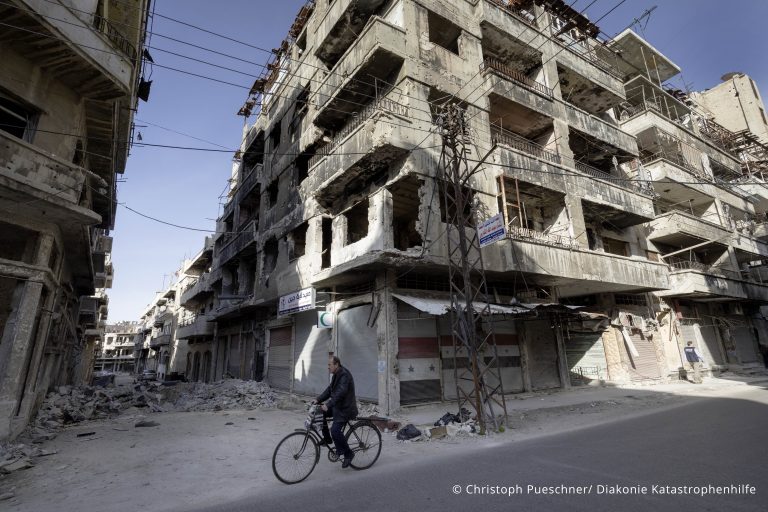 Cash and Voucher Assistance in Syria: Opportunities and Challenges