Charlotte Faltas joined the Centre for Humanitarian Action (CHA) in December 2019, where she supports the research project Shrinking Humanitarian Space. In this interview of the series “Faces around CHA”, Charlotte explains more about what she is working on at CHA, namely, anti-terrorism measures and sanction regimes. How is it that humanitarians increasingly report on the criminalisation of their work, and what can be done about it? Additionally, Charlotte shares her home office experiences in the Corona times, and tells us what she is examining in her master thesis.

Charlotte, you are one of the co-authors of the recently published debate contribution “Counterterrorism Measures and Sanctions Regime: Shrinking Space for Humanitarian Aid Organisations”. In three sentences, what is it about?

This contribution to the debate highlights the negative effects that overlapping and sometimes contradictory counterterrorism measures and sanction regimes have on humanitarian aid and its scope of action. In technical jargon, the latter is also referred to as the Humanitarian Space. Compliance with national and international counterterrorism standards on the one hand, and with regulations and targets set by organisations on the other hand, often leads to conflicts with the observance of humanitarian principles. The consequence of this is that aid organisations can no longer reach people in need. Let us look at Gaza, for example: there, the effects of anti-terrorism measures and sanctions regimes are making the already complicated humanitarian situation even more difficult. This applies, for example, to Oxfam in the Palestinian territories or Norwegian Peoples Aid in Gaza. In addition to the legal framework, the contribution to the debate also explores the German context and provides recommendations for donors.

What genuine contribution can CHA make to the field of counterterrorism measures and sanction regimes?

I believe that CHA’s independent position makes it particularly suited to initiate and strengthen a transparent debate between humanitarian organisations, states and donors. The current policy of “don’t ask, don’t tell” makes such an exchange difficult, especially in the field of counterterrorism measures. In order to promote an open dialogue, it is first of all important to identify problems and name them. Only then can the current confusion of political, military and humanitarian objectives, which endangers independent aid, be better countered.

Do you have a practical example that illustrates the results of the contribution to the debate?

What I find very interesting is the rapidly increasing use of preventive measures to prohibit individuals and groups from supporting or participating in violent extremism. These measures are also called ‘Preventing / Countering Violent Extremism’ (P/CVE). P/CVE is increasingly used as part of a counter-terrorism strategy or as a tool for conflict de-escalation, and it is integrated into the donor policies. The P/CVE agenda has been included by the UN in its Action Plan to Prevent Violent Extremism (2016) and more recently in the UN’s New Way of Working. Since P/CVE goals are inherently political, the boundaries between political, security and humanitarian goals could be further blurred and thus run counter to the humanitarian principle of impartiality. Since donors provide much of the funding for P/CVE, humanitarian organisations risk turning away from their principled humanitarian work to political objectives, or simply describing their programs as political in order to get project funding. This development was identified in a 2018 study by the Norwegian Refugee Council (NRC).

Besides your work at CHA, you are currently writing your master’s thesis called “The Legal Architecture of Counterterterrorism Legislation and Sanction Regime: Impacts on Principled Humanitarian Action” at the European University Viadrina in Frankfurt Oder. The results will be included in a CHA publication this summer. Can you tell us a little bit more beforehand? What is your research question?

In my master’s thesis, I focus on the complex architecture of legislation, sanctions regimes and counterterrorism measures, as well as their problematic relationship to both international international law and principled humanitarian aid. Many humanitarian organisations are currently feeling the negative – albeit unintended – impact of counter-terrorism measures on their work, for example, through extensive donor conditions, financial controls and criminalisation. This can have far-reaching consequences: for instance, between 2008 and 2010, after the United States listed al-Sabaab as a terrorist group, humanitarian aid in Somalia declined by 88%.

My research objective is therefore to examine the legal scope of financial and material “support” for listed armed groups (see US, EU, UN lists) and the resulting risks of legal liability and other implications for humanitarian organisations. This is very complicated, as legal regulations can emanate from both donor and recipient countries as well as from the humanitarian organisation’s countries of origin. Legislation and sanctions regimes can even have an extraterritorial effect in some cases. This means that governmental legislation applies across national borders, as is the case in the USA, for example. However, I believe that, although many organisations fear persecution and liability, other more practical effects may be far more pressing, despite the fact that legal bans are obviously problematic.

COVID-19 has banished all CHA employees to the home office. How are you coping with the new work situation, and do you have a book recommendation from the humanitarian sector for the time when we are all at home and supposedly have more time to read?

In the beginning it took me some time to get used to the new work situation, but maintaining a regular work rhythm and taking a little walk every day has worked wonders for me. I look forward to seeing my colleagues off-screen again soon, as soon as the situation allows it. I am still very concerned about the global impact. I hope the crisis will challenge our thinking on sustainable development and contribute positively to more cooperation and more inclusive approaches. I am interested in books that deal with this topic. I have been following the work of Dutch historian and journalist Rutger Bregman for some time. His views on world improvement and equal opportunities are refreshing, inspiring and give hope. In his latest book, “Humankind: A Hopeful History“, he deals with the nature of mankind. In it, he refutes Western traditions of thought and structures and calls for a new, optimistic paradigm. Empathy, forbearance and cooperation are at the forefront of it.

Charlotte Faltas studies International Human Rights and Humanitarian Law at the European University Viadrina. In her master’s thesis called “The Legal Architecture of Counterterterrorism Legislation and Sanction Regime: Impacts on Principled Humanitarian Action” she deals with the legal tension between principled humanitarian aid and counterterrorism measures.

The interview was conducted in April 2020 by CHA Communications Officer Lena Wallach. 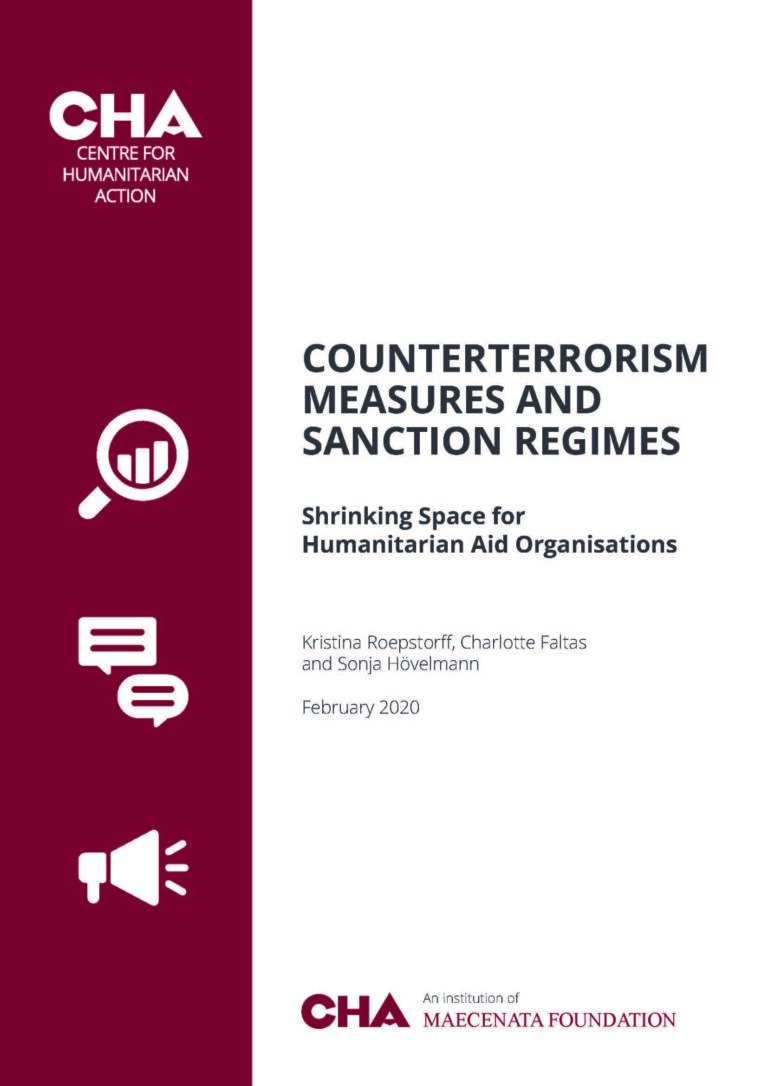