Humanitarian Action in the “traffic light” Coalition in Germany

There is cause for cautious optimism. On November 24th, the “traffic light” coalition presented its coalition agreement. The nearly 180-page document contains a few lines on humanitarian aid. In it, many important calls made by CHA and numerous other aid organizations in recent years have been taken into account. The coalition agreement can also be rated positively in terms of policy coherence. However, there are also serious omissions and gaps. What does that mean in detail?

In 2020, Germany spent around 3.7 billion US dollars on humanitarian aid. Over the  past several years, the German federal government has become the second largest humanitarian donor in the world. Only the United States of America has provided more money in absolute terms to support people in need across national borders. There are good reasons for this increase in funds, most importantly because there has never been a more humanitarian need with numerous long-term wars and conflicts and climate-related extreme weather events affecting more than 273 million people. A continuation of this policy in the “traffic light” coalition seems certain. In the coalition agreement, the coalition parties clearly commit themselves to a need-based stabilisation and increase of funds for humanitarian aid. Compliance with the ODA quota and the use of 0.2 percent of GNI for LDCs are also guaranteed in the agreement. These positions reflect the party programmes of both the SPD and the Greens. The FDP has not previously commented on budget issues in humanitarian aid, but has opted for “quality instead of quantity” with regard to the funds deployed and thus kept a back door open in the party programme.

But it is not just the growing humanitarian need that poses major challenges for humanitarian aid. The humanitarian space in which aid organisations can operate safely has been shrinking for years. The humanitarian principles (humanity, neutrality, impartiality, and independence) have seldom been so disregarded and undermined as they are today. Again and again, humanitarian aid is misused as an instrument of power politics. Against this background, aid organisations have long called for a principled policy. So far, the German Government’s record on this point has been mixed. Within the context of international humanitarian aid, Germany is generally considered to be comparatively principled and free of political agendas. In CHA’s report on German humanitarian aid, it was concluded that a “link between humanitarian aid and political conditions cannot be structurally determined”. Amazingly, however, the coalition agreement now lacks a clear commitment to the humanitarian principles, which the outgoing government had clearly recognised, and which was explicitly mentioned in the Green Party programme. However, the coalition parties have stated that they want to work for “improved access to humanitarian aid in conflict regions and for better protection for aid workers”.

One very positive aspect of the agreement is that the parties are also committed to the “Grand Bargain” resulting from the World Humanitarian Summit, which was not previously mentioned in any of the party programmes. Concretely, the coalition is committing itself to make one third of its humanitarian budget flexible and to further develop localisation of humanitarian aid. The coalition partners are thus fulfilling a central requirement of many relief organisations, which enable funding to be available quicker after crises and to invest in prevention. When it comes to flexibility of funds, Germany has long been considered one of the worst performers among the donors. That can change now. If consistently pursued, the topic of localisation would have the potential to turn the entire humanitarian system upside down.

Closely related issue of humanitarian principles is the question of the priorities of German humanitarian aid. The most important requirement of aid organisations here is that aid should be provided based on need and not be guided by political interests. So far, the German commitment had set clear regional priorities with a disproportionately large share of the funds going to Syria, due to the high number of refugees. The “traffic light” coalition has now also reaffirmed this focus in the coalition agreement. In principle, such a strong focus could come into conflict with the humanitarian principles. But if you look at the German commitment in an international context, it becomes clear that that the humanitarian needs in Syria are far from being met despite the large German contribution. With 4.2 billion US dollars, the Syrian “Humanitarian Response Plan” is the largest in the world. However, it is only 27 percent financed. A high level of German commitment therefore continues to make sense in terms of need. At the same time, however, the humanitarian crises in South Sudan and Yemen are even more underfunded. In absolute numbers, this also applies to Venezuela. Beyond the focus on the Syrian crisis, the coalition agreement does not specifically address other countries. However, it should be emphasised very positively that “forgotten crises” are explicitly mentioned in connection with the increase in funds for humanitarian aid. This fulfils another important call from aid organisations and is a continuation of the commitment of the previous government in this area.

Although the increase in funds for humanitarian aid in the face of the increasing humanitarian needs welcomed, if not demanded, by the humanitarian community, there are also voices critical of the growing importance of humanitarian aid. The fact that humanitarian aid is becoming increasingly important is a consequence of political failure. The main causes of the deterioration in the humanitarian situation – inequality, violent conflict, and climate change – are not inevitable but the result of political and economic decisions. Cornelia Füllkrug-Weitzel complained in a recent article in “Welternährung” about a move away from “development aid” and addressing the root causes of humanitarian crises toward improved processes and structures. Instead of addressing geopolitical interests and arms exports, the “triple nexus” of humanitarian aid, development cooperation, and peacekeeping are being discussed. Instead of discussing a sustainable global food system, the advantages of cash assistance over food aid are discussed. Instead of ushering in the end of a carbon-based economy, investments will primarily be made in climate adaptation and resilience. Finally, instead of talking about “reforming and strengthening multilateralism, human rights, and international humanitarian law”, the humanitarian system is placed in the hands of market players and partially privatised in line with neoliberal ideals. CHA also criticised the federal government on matters of foreign policy such as the return of rescued asylum seekers to the disastrous humanitarian situation in Libya, which is incompatible with humanitarian principles. At least in some of these areas, a higher level of political coherence and a clear will to tackle the causes of humanitarian crises appears to be emerging under the “traffic light” coalition.

The issue of climate protection was a particular focus throughout the negotiations. Contrary to all fears, set some ambitious goals have been set, especially in the area of ​​the expansion of renewable energies, which could enable coal to be phased out in 2030. However, this can only succeed if the right instruments are developed quickly. Many environmental associations (with the exception of Fridays for Future) assess the projects as positive in principle, with the exception of transport policy. With the goals set out in the coalition agreement, Germany could consistently comply with the commitments made in the Paris Climate Agreement. In this context, funds for climate policy are also expected to grow in line with the Greens’ demands, although the coalition agreement no longer contains any specific amounts. It says here: “We will fulfill our promises for the German share of the 100 billion US dollars in international climate finance within the framework of a coherent foreign climate policy and increase it in the future.”

Another important issue in terms of policy coherence is conflict prevention. According to the coalition agreement, there will be stronger restrictions than before in the area of ​​armaments. The coalition parties are clearly in favor of disarmament policy and reaffirm their commitment to an EU arms export regulation and a national arms export law. In addition, there will be no licenses for arms exports if the recipient state can be shown to be directly involved in the Yemen war. This sentence can already be found in the coalition agreement of the GroKo from 2018, but 2019 saw Egypt and the United Arab Emirates, two of the nine largest German arms recipients, involved in the Yemen war. No other crisis regions are named. In addition, the coalition agreement provides for a strengthening of crisis prevention and civilian crisis management, and the contracting parties undertake to “continue to increase expenditure on crisis prevention on a one-to-one basis as expenditure on defense”. In addition, the goals of the Humanitarian Development Peace Nexus are emphasised as mandatory in the coalition agreement.

The coalition is also trying to initiate a “paradigm shift” on the issue of forced migration, which many refugee organisations rate as at least partially positive. In principle, “irregular migration” should be reduced by creating safe escape routes. To this end, asylum procedures are to be accelerated, independent advisory bodies are to be created, no additional safe third countries are to be named, humanitarian visas with digital allocation procedures are to be introduced, and illegal pushbacks at the EU’s external borders are to be ended. The coalition also wants to reform the EU asylum system. If this fails, there is a desire to “actively contribute to the fact that other EU states take on more responsibility and comply with EU law” with a coalition of member states willing to accept them. However, there are no concrete approaches to counteract the current violations of international law in Poland, Greece, Croatia, and the Mediterranean. It is also not yet clear how the “coalition of the willing” can be helped to success, because it has hardly been able to show any results in the past few years. With regard to sea rescue, the “traffic light” coalition condemns the obstruction of civil sea rescue and advocates for a “state-coordinated and European-borne sea rescue”. This is to be taken over by the EU agency Frontex, a fact that is likely to be viewed critically by many organisations already active because in the Mediterranean given Frontex’s previous human rights violations and “criminal machinations”. These have come under heavy criticism and the mixing of external border protection and sea rescue has proven to be highly problematic.

Overall, it can be said that the “traffic light” coalition – as far as one can read from the short relevant passages of the coalition agreement – has set the right course for humanitarian aid. Apart from the lack of commitment to humanitarian principles, which is of the greatest importance in the face of the ever-decreasing humanitarian space and which should not be missing in any document on humanitarian aid, many demands of civil society have been met. There is also cause for cautious optimism when it comes to policy coherence. The coalition agreement focuses more strongly than its predecessor – on important causes of humanitarian crises and sets the right goals in many areas. To what extent the promises will be implemented and the right instruments have been and will be chosen in order to achieve the goals set, however, remains to be seen and must be closely monitored by civil society organisations. Naturally, many detailed questions are still unanswered.

Katrin Radtke is senior researcher and lecturer at the Institute for Law of Peace and Armed Conflict (IFHV) at the Ruhr-University Bochum (RUB) and scientific director of the academy for humanitarian action (aha).

Janna Leipold is a Student Assistant at the IFHV. She is currently a student at the Ruhr-Universität Bochum, studying Geography and Politics, Economy and Society (PWG). 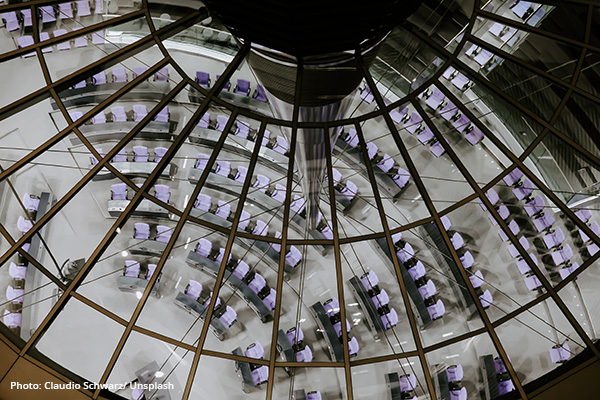 Options for action for humanitarian organisations after the federal election 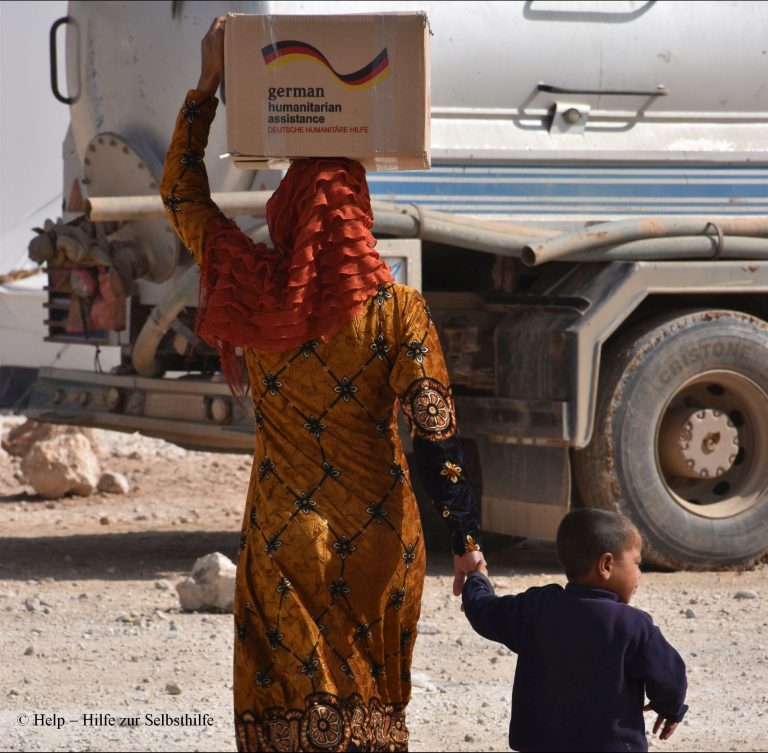 Where does German humanitarian assistance stand?